Written in the Stars: Zodiac Bar opens THIS FRIDAY!

After building a reputation for putting on unforgettable parties all around London over the past year, ZODIAC Bar finally has a new home, we chat to Jade and David ahead of their SOLD OUT Opening weekend. 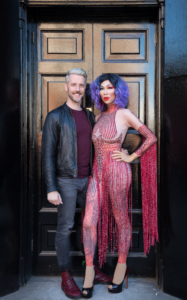 It’s a sad fact that, over the past decade or so, London has been losing gay bars and clubs at a devastating rate that threatens to make them as much a thing of the city’s past as pie and mash shops, or the night tube. That’s why when a new one opens, it’s a massive cause for celebration.

So excuse us for getting overly excited about the launch of ZODIAC, the baby of Jade Phoenix Hoskins, and her partner David. There may be some of you out there who’ll say ‘hold on, I’ve already been to one of ZODIAC’s parties’. And it’s true, they’ve been putting on events over the past year in different venues all over the capital, including brunches, drag shows and quizzes, but now they finally have a home to call their own up in Camden – a part of the city that has been lacking a queer venue since the closure of The Black Cap and Her Upstairs.

Gay London Life caught up with Jade and David to hear about this weekend’s grand opening.

So where did the name ZODIAC come from?

Jade: I named it that because ZODIAC is universal. Everyone is included in the Zodiac and everyone is included and welcome in our space! Our philosophy is one of community, where people from all over the LGBTQ+ spectrum can come together and have fun in a supportive environment. 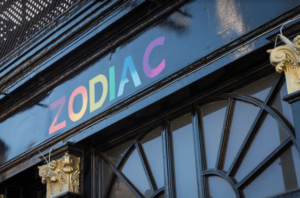 Why were you inspired to open a gay bar? Was there anything you thought was missing from the scene?

J: I felt like some of the other venues in London only catered to small sections of the community.  I wanted to start a place where everybody could come together and feel unity.

How has the process of setting it up been during a global pandemic?

David: It’s been a very demanding and challenging time. We started with no money and took over a struggling small venue which became the first ZODIAC Bar. The support was overwhelming and we became busy very quickly. Unfortunately we had to deal with dishonest business partners and move on, but we are now really proud to say that all of our new investors are members of the queer community, and we have a really great team around us now.

Why do you go for Camden in the end?

D: We have lived in Camden ourselves for four years and have always loved the diversity of the area.  We also felt that there was a real need for a safe space following the closure of the Black Cap, so we were really happy when the venue in Camden became available!

How will Zodiac be unique?

J: You can expect a real family feel, as we’re not just another corporate-owned gay bar.  How many places in London can you go where the owner is on the door welcoming you into the venue themselves?

What have you got planned for opening night?

J: You can expect a big night with influencers, celebrities and a show featuring some of London’s best performers.

What other things can we look forward to in the rest of the year?

Finally, what are your zodiac signs?

J: We are both Scorpios, which mean that we have strong and passionate personalities!  The great thing is that our skills are different, so we have learned to divide our efforts and cover different parts of the business.  I’m more front of house and David takes care of the less glamorous things, like finance and operations.

This weekend’s Grand Opening is a ticket-only event.

Keep up to date HERE