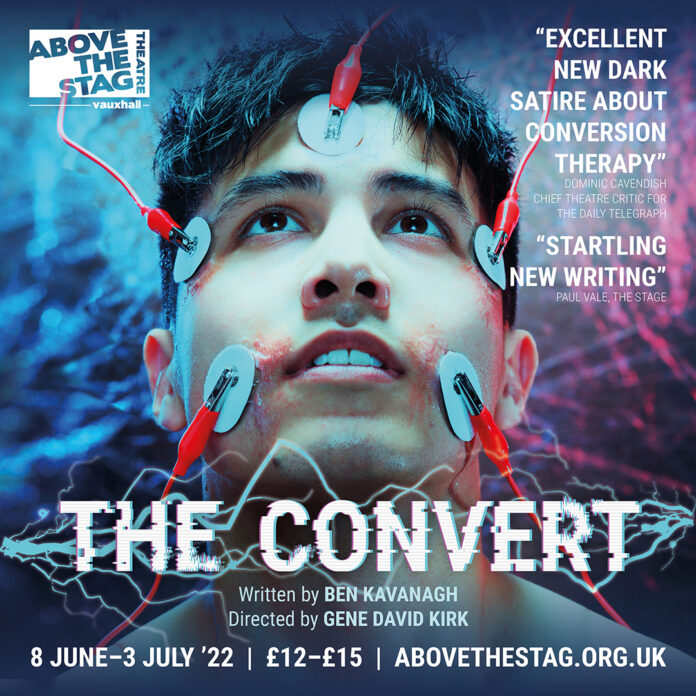 The Convert, Above The Stag review – ‘a dystopian conversion therapy tragedy’

Last month, it was announced in the Queen’s Speech that, for the first time, it will be illegal to have therapies aimed at changing a person’s sexual orientation in England and Wales – commonly referred to as Conversion Therapy. But, what should’ve been a victorious moment for LGBTQ+ Britons turned out to have more than a few caveats. First, the announcement was a complete U-turn to an announcement in April that the government was scrapping plans for a ban. Secondly, it would only protect those under 18 and those above that age could still seek conversion therapy if they consented to it. Thirdly, and perhaps most devastatingly, it would not ban conversion therapy for transgender people. These are the thrashing waters that The Convert wades into.

Set in a dystopian, not-too-distant future, we meet Alix (Nick Mower) during his enrolment at The Facility – a sort of re-education camp aimed at turning people who are ‘other’ straight. His Arbiter (Ben Kavanagh, also the playwright) is there to make sure that he is corrected, so that he may be re-introduced into society. Should he fail, he’ll be sent to the mysterious Other Place where all the other queer people who couldn’t conform end up. Along for the ride is Alix’s cellmate Marcus (Sam Goodchild), whose denial of his sexuality and commitment to the programme serves as a soundboard for conformity.

Exactly as you might expect, this is rather a gruelling watch. We seldom get a moment of respite from psychological terrorism, physical torture and sexual violence, and even glimmers of hope are scarce. But with a subject as dark and as steeped in trauma, this was never going to be a light-hearted evening at the theatre. Were it not for the awe-inspiring and magnificently sci-fi production, lighting and sound design (David Shields, Joseph Ed Thomas, George Reeve and Paul Gavin respectively) that provides some distance from its plot, this production would have you teetering at the edge of the platform on your tube journey home.

As the archetypal wide-eyed, young buck Alix, Mower delivers an impressively varied performance that is both endearing yet still takes us to the greatest depths of despair. His fantastic set of pipes is taken full advantage of during the confusing closing sequence. In line with the twist in his narrative, Goodchild’s Marcus is characteristically flat yet with delicate moments of tenderness. The evening’s standout performance, however, is delivered by Kavanagh who gives his all in getting his audience to revile the abhorrent Arbiter.

For a play that deals with matters so pressing and contemporary, the decision to set it in the future is interesting and opens up many possibilities. While this is an engaging demonstration of the horror show that is conversion therapy, since this production comes in the wake of cryfests Boy Erased and The Miseducation of Cameron Post, perhaps a little levity wouldn’t go amiss. Just a few instances of triumphant queer resistance would turn this play into something quite powerful.

The Convert is playing at Above The Stag, 72 Albert Embankment, SE1 7TP until Saturday, 3rd July 2022.

GET YOUR TICKETS HERE!