The Convert at Above The Stag : We chat to writer Ben Kavanagh

After the sunburnt silliness of Alright Bitches!, Above The Stag is taking things in a wholly different direction with its latest production, The Convert. Gay London Life caught up with Ben Kavanagh, the writer behind the play, to learn a little more about the thinking behind it

GLL: Give us a brief intro to The Convert.

Like all good theatre, the heart of The Convert is a love story, albeit one that takes place amid the darkest of environments — in this case, a conversion therapy facility in a parallel universe to our own, where homosexuality is illegal and “perpetrators” are held to be “corrected” in order to return to the society. If they do not, they go to the “Other Place” with the rest of those who have failed. It’s an epic piece of in-yer-face theatre that I hope will have you laughing one minute and horrified the next.

GLL: It’s a hugely topical subject given the government’s toing and froing on the matter – was that a reason why you wanted to write about the topic?

As is almost always the case, these things come together by happy circumstance. In early 2021. the director, and close friend of mine, Gene David Kirk phoned me (ironically while I was waiting outside a hospital!) to tell me the then-Chairman of Above the Stag Theatre, Matthew Baldwin, was commissioning companies who wanted to try a work in progress of new writing, in a CONTACT season. Matthew had spoken to Gene to say they had a slot and did Gene want it. Gene then phoned me to ask me if I was working on anything. I had just completed a run of short plays, one of which was an extended monologue about a doctor who speaks to the audience about an alternative society where citizens can change their nature in order to increase their life chances. I mentioned to Gene that I’d always thought this would make a good play and that I’d been thinking the themes were very similar to conversion therapy, which was in the news at the time. Gene liked the idea and so I said I’d write the first 20 pages to see if there was a play and the rest is history…

GLL: You’ve mentioned that the script includes techniques used in real life, did you conduct a lot of research?

I did. Such an important topic requires a great deal of research. I was fortunate to speak with people who had undergone conversion therapy but funnily enough, no organisations or individuals who believed in the practice would agree to talk to me. Go figure?!

GLL: If so, did you find out anything interesting that you couldn’t include in the play?

It wasn’t so much about what couldn’t be included, it was more about what would work theatrically and also what the audience could take. Conversion therapy is incredibly triggering and hard to witness, so one has to be careful about the extent to which you show it and for how long. You don’t want your audience to turn away, you want them to watch it — only this way will you have an effect on them.

GLL: How does such a sensitive subject affect the rehearsals?

I think actors are very good at dealing with sensitive subjects, precisely because the business of acting is putting oneself into other people’s shoes. In other words, it relies on a degree of empathy. This extends not just to the characters but the subject matter and the other people in the room also. Certainly, aspects of the play are helped by having an intimacy director and a fight choreographer, too.

GLL :What do you hope to achieve with this production?

I know the topic is very prevalent and of course, we want people to know more about conversion therapies but it’s not about education per se — otherwise, the play would just be set in the current day, like the films Boy Erased or Pray Away. Indeed, I think education in adults is best done by the individual. For me, it’s about reaching them on a very human level and making them feel to the extent that they’ll leave the theatre wanting to know more and ideally to become active too. It’s not the job of theatre-makers to educate people and if you do, you run the risk of patronising your audience. The business of theatre is far more sneaky! I want to make them feel and inspire them to think. 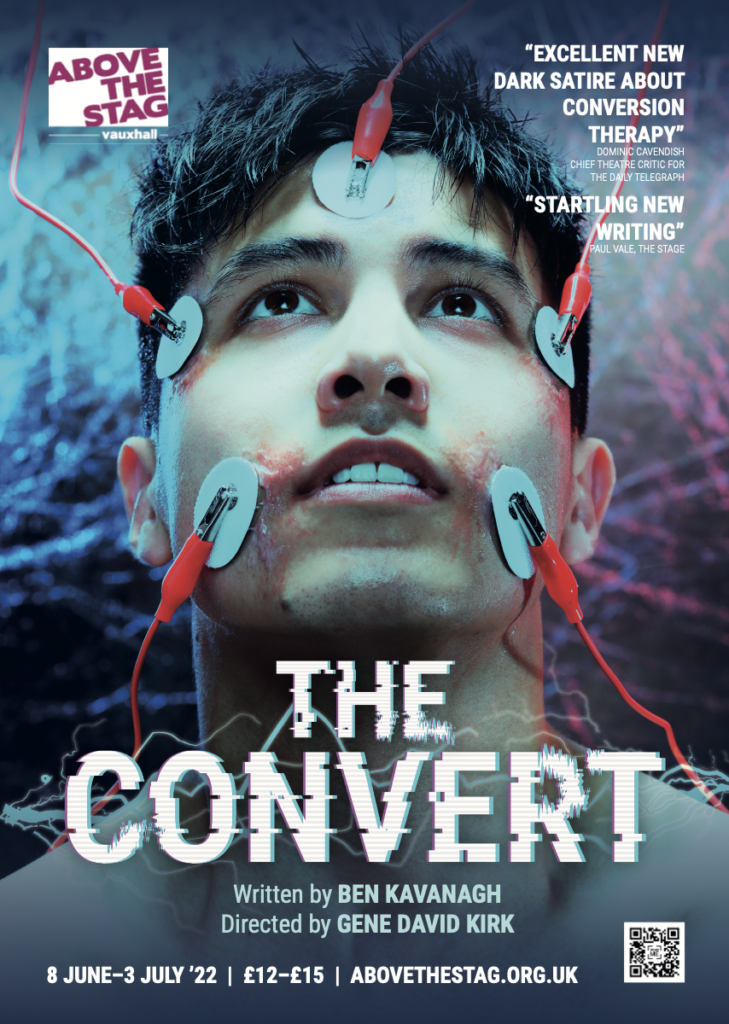 The Convert runs from Wednesday 8th June to Sunday 3rd July at Above The Stag, 72 Albert Embankment, SE1 7TP, Nearest Station: Vauxhall. GET your tickets HERE! 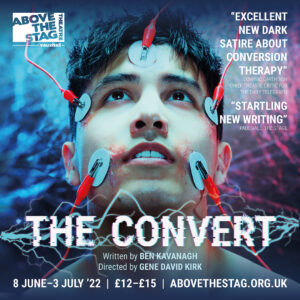