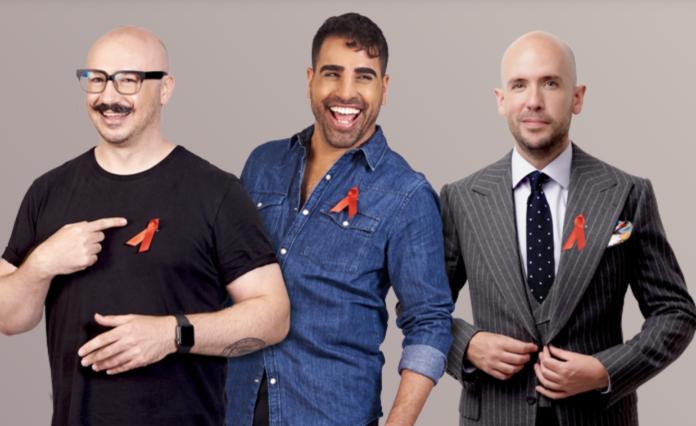 We round up the events and fundraisers taking place in the capital to support World Aids Day.

Since 1988, December 1st has been Worlds AIDS Day. It’s an opportunity for many things: to reflect on the past and remember those who have lost their lives to the disease; to assess how we can improve the lives of those presently living with the virus, and to look ahead to the future and plan how we can work towards the elimination of HIV.

In London, there are a number of events happening on the day and we’ve rounded up a few below. 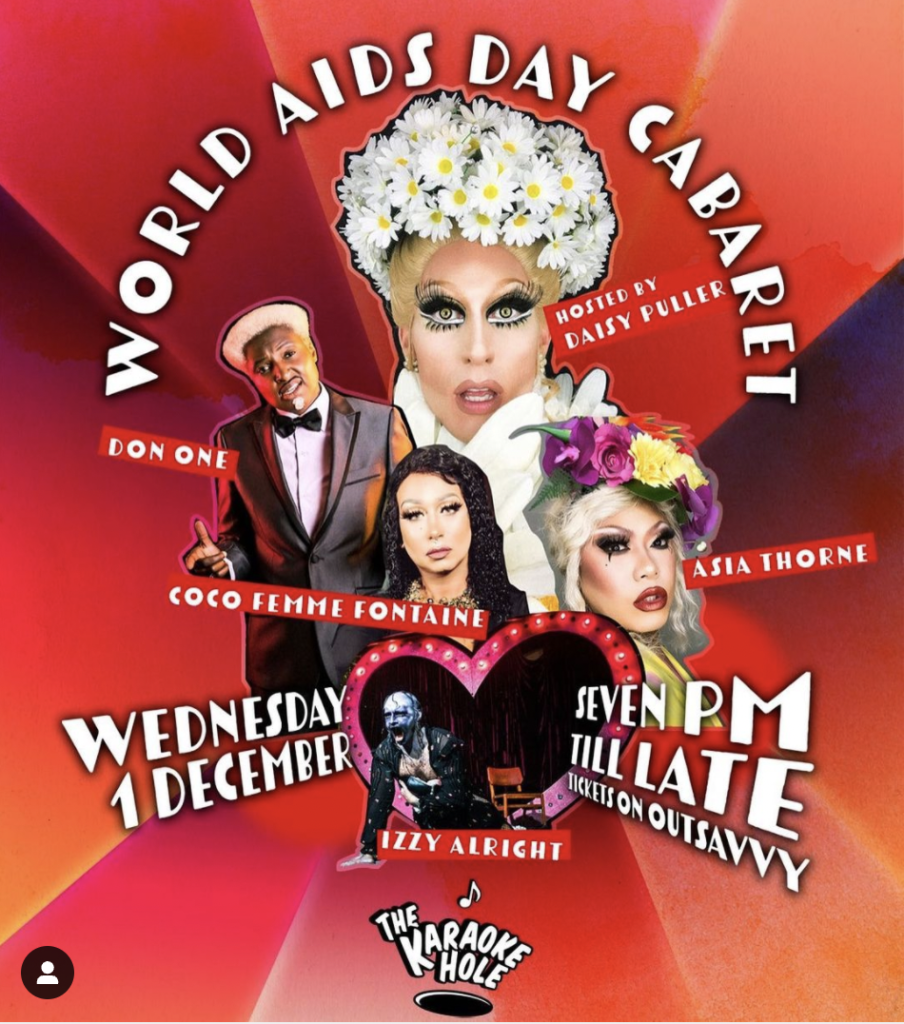 Down beneath street level on Kingsland Road, The Karaoke Hole will be hosting an eclectic cabaret show packed full of drag, games and fun, with all ticket money going to Positive East, a London charity that has been providing holistic care to those living with HIV for more than three decades now. On the night, Aussie drag darling and HIV peer mentor Daisy Puller will be on hosting duties and there’ll be acts from Coco Femme Fontaine, Izzy Alright, Asia Thorne, and Don One.

After considerable effort from various campaigning groups, the HIV prevention medication, PrEP, was made routinely available on NHS England last year. It’s easy enough to get started on the medication if you’re in one of the at-risk groups, but Soho sexual health clinic 56 Dean Street has seen a worrying rise of people aged between 18 and 21 contracting the virus in the first few months after moving to London. That’s why they’re teaming up with G-A-Y Bar to raise awareness and make it even simpler to start on PrEP. Between 12 and 8pm on World AIDS Day, anyone can go into the bar on Old Compton Street without an appointment, undergo HIV and blood tests and start PrEP there and then. 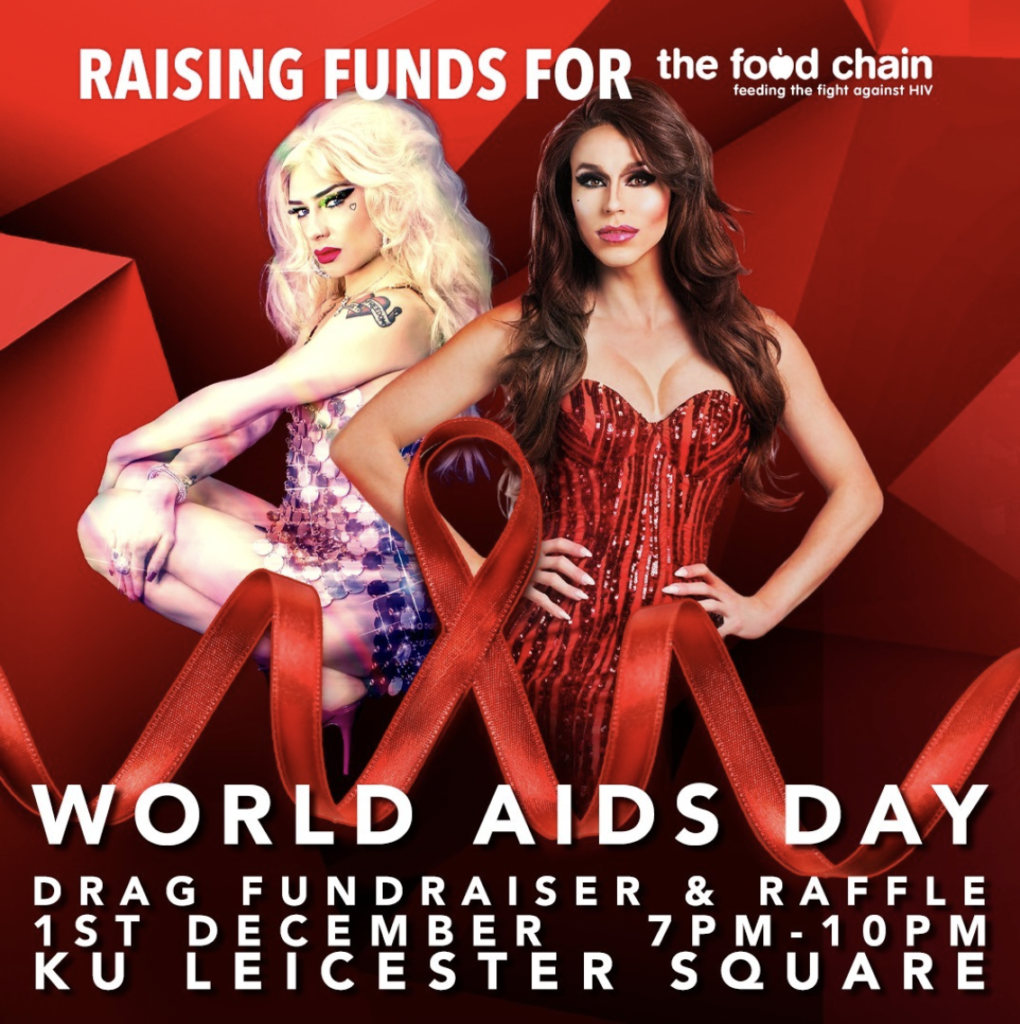 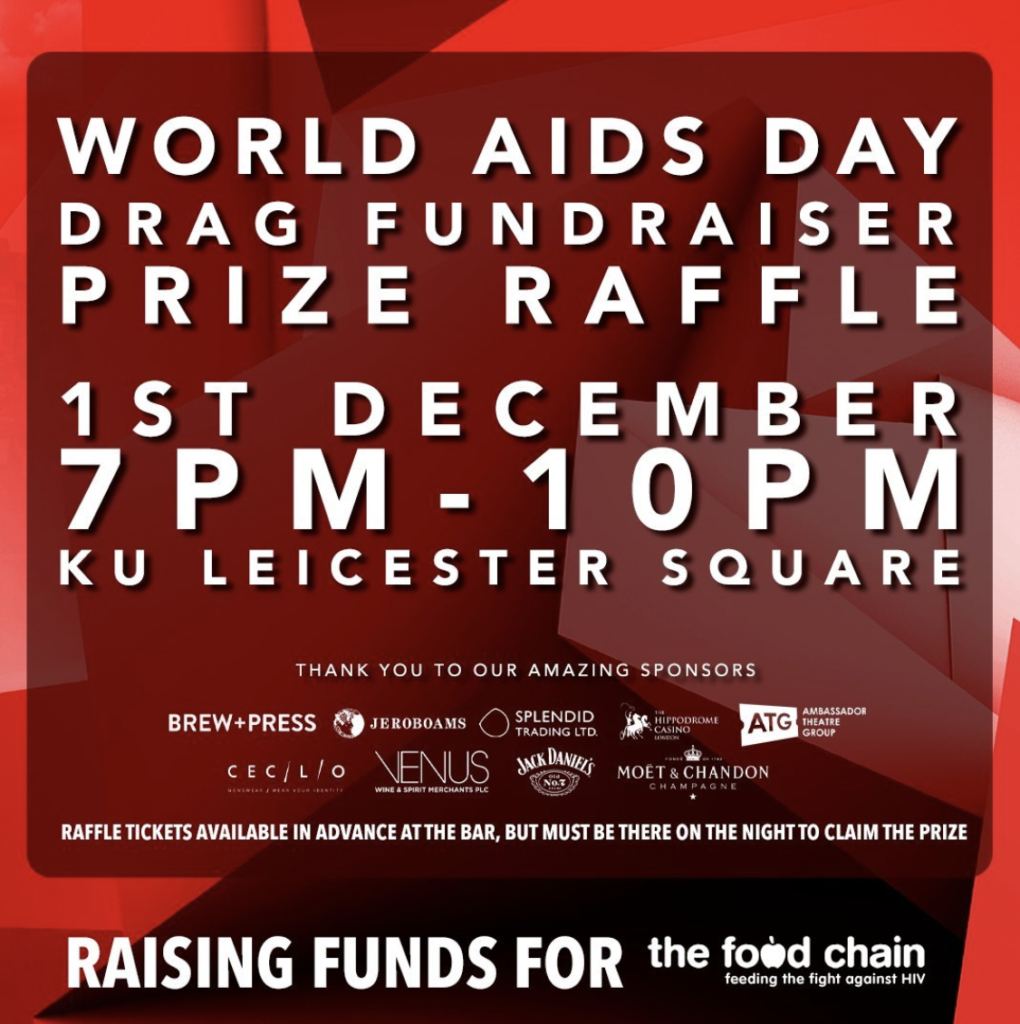 Sticking around in Soho, Ku Bar is holding a raffle with some pretty impressive prizes, with ticket money going to The Food Chain, a charity that delivers meals, groceries and cookery lessons to those living with HIV in London and their dependents. Vicki Vivacious will be leading proceedings and there’ll be performances from Honey Foxx, Kiki Snatch, Diamond Daniels and Candy Heals. Tickets are available to buy on the night, but you must be present on the night to collect prizes. Talking of which, you could walk away with a holiday for two to Prague, goodies from Cecilio Underwear and artwork from Mark Wardel.

Just around the corner on Old Compton Street, Admiral Duncan is also raising money for The Food Chain. Tanya Hyde will be up on stage at 9pm and convincing people to get their wallets open. 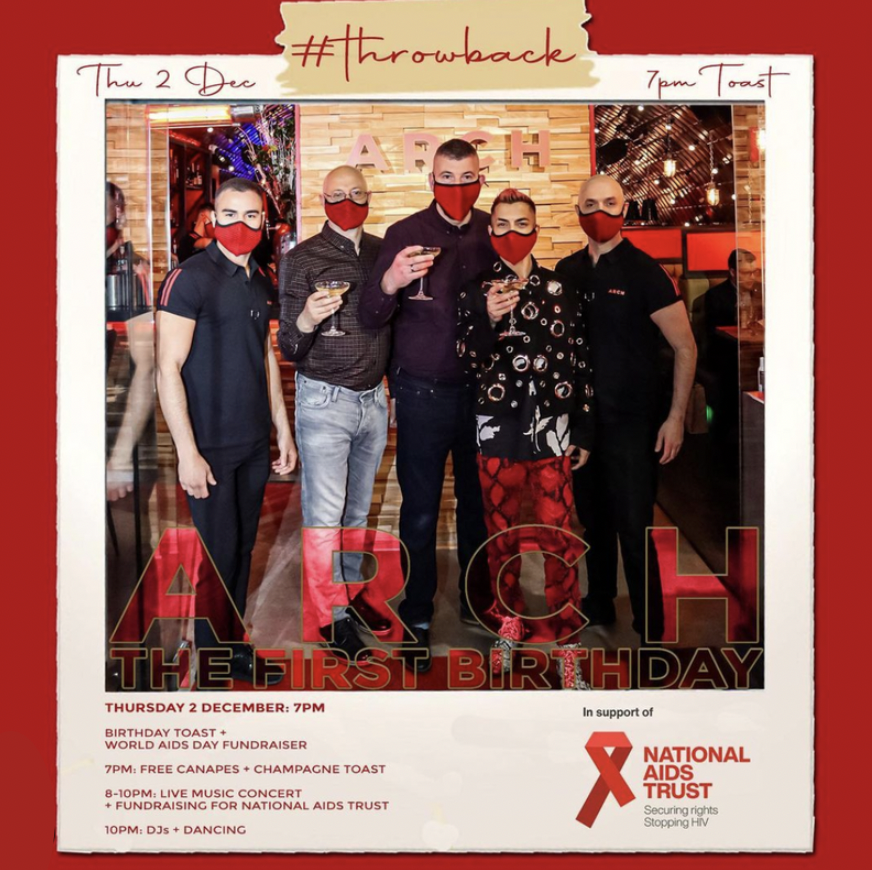 It’s been just over a year since ARCH opened its doors in the middle of a global pandemic and by coincidence, it falls around the same time as World AIDS Day. To celebrate both occasions, they’re holding an event that will raise money for GMI Partnership, an outreach project carried out by three charities that focuses on HIV testing, condom distribution and providing sexual health advice. The night itself will start with a Champagne toast and canapes, before moving on to live music and an auction, and finishing with DJs and dancing. 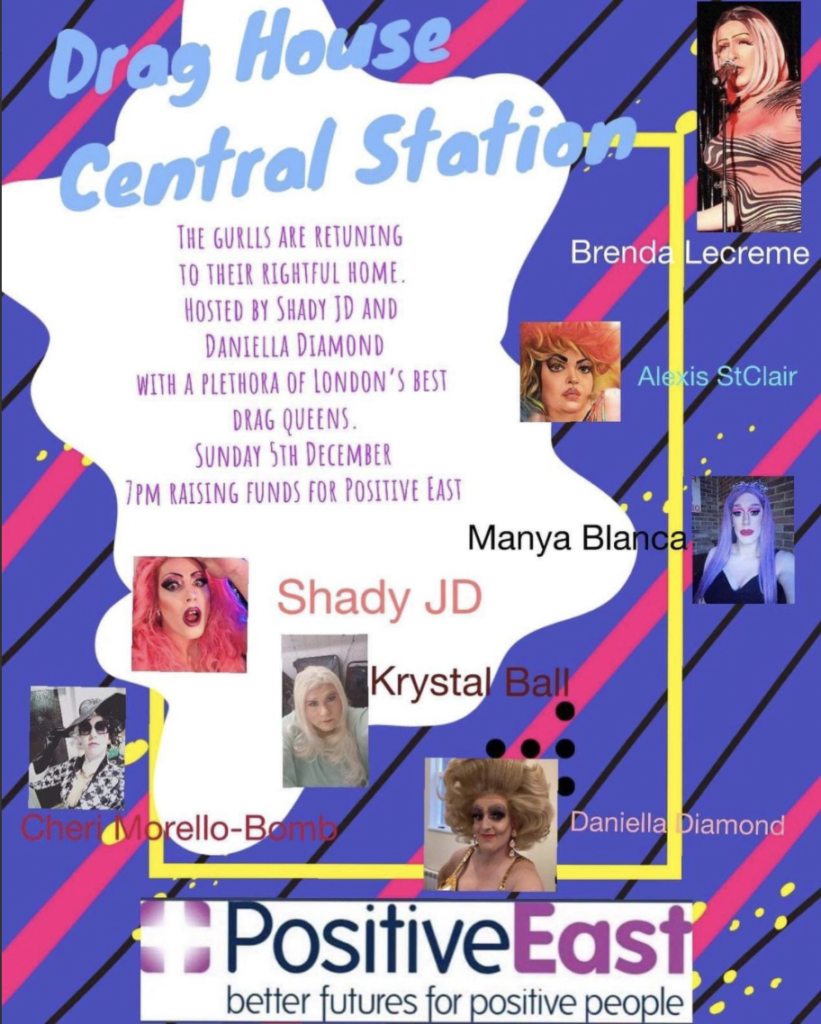 There’s a camp ol’ drag show happening at Central Station this weekend and you can laugh in the reassurance of knowing that money raised from the night will be going into the coffers of Positive East. Shady JD and Daniella Diamond will be kicking things off, and there’ll be turns from Cheri Morello-Bomb, Alexis St Clair, Lady Guy Anna, Manya Blanca, Krystal Ball and Brenda LaCreme.

And of course, don’t forget the candlelit vigil to be healed in Soho Square for Aids Memory UK and StopAIDS. 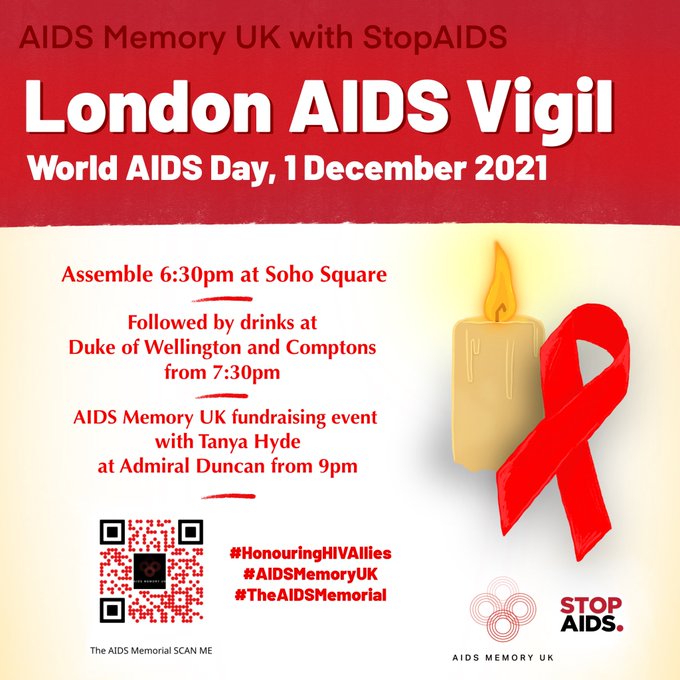 Make sure you ROCK THE RIBBON this WORLD AID DAY. You can donate HERE