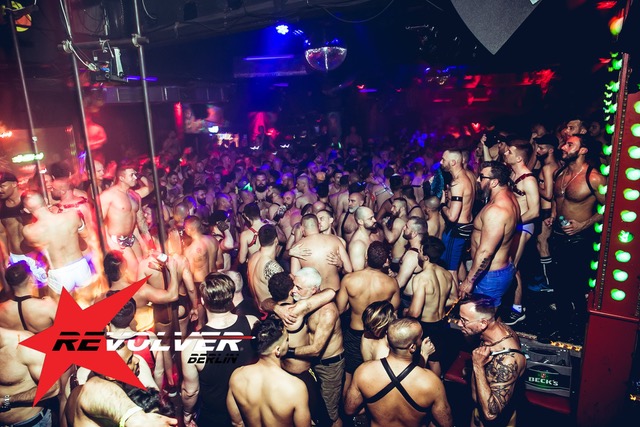 Two of Berlin’s Biggest Monthly Queer Events are coming to London at Londons most Prestige Clubbing Venue, Ministry Of Sound. This coming July! With a massive Day and Night Party over 18hrs and with a Star-Studded 16 DJ Line Up.

REVOLVER PARTY Established. originally in London in 2009 by Dj and Promoter Oliver M who moved it, in 2012, to Berlin, on the 2nd Friday of each month at the World Famous kitKat Club.

REVOLVER PARTY hosts the best local and international DJs with unique performers from the International gay underground scene.Our venue for Revolver Party Berlin is the infamous and beloved KitKat Club. Revolver managed to establish itself as Berlins most successful Gay Event with between 2000 and 4000 International Clubbers from all over the World and cementing the brand in line with some other Worlds leading Party Brands.

At REVOLVER the music concept is a mix between forward-thinking progressive and melodic techno on the main floor and modern house classics and Italo house on the other floors.

AB:EAST PARTY was established in March 2016 in Berlin by the team behind REVOLVER .

B:EAST has evolved within just a few months into one of Berlin’s coolest and most talked about club nights. B:EAST PARTY, is based on the last Saturday of each month in one of Berlin’s most exciting new venues which features one of Europe’s best Sound and lighting system. 1 Stralau (formerly known as Techno Club Magdalena ) is situated in Berlin Friedrichshain at the Spree with massive 3 Floors indoor venue and outdoor areal inclusive a pool installation. B:EAST has already made its name as one of BERLIN’s and Europes’ most successful Gay Techno party with an incredible list of monthly International guest and resident Dj’s/Producers.

COMING TO LONDON THIS JULY

From Berlin to London.

Sunday 11th July , All day All Night at Ministry of Sound,

Doors open noon until 9pm with the B:EAST OPEN AIR.

and Door Host HER MAJESTY MINTY