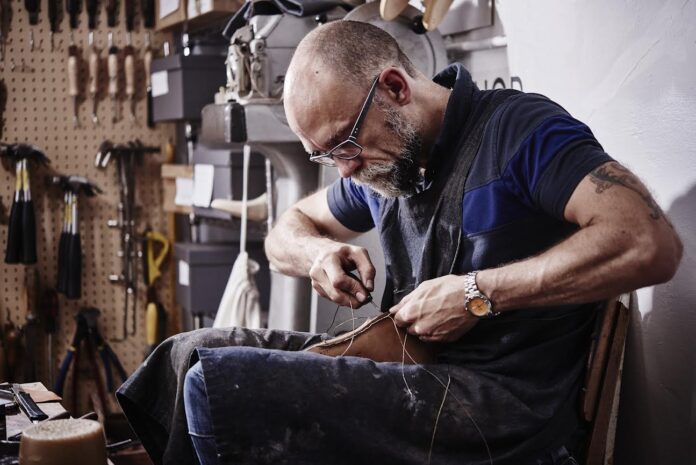 At Gay London Life, we champion gay businesses of all types, from all over the capital, today our focus is on Carréducker, bespoke shoemakers, training and suppliers, available both online and now back in person.

From humble beginnings at his first shoemaking class in Barcelona in 1992, James Ducker has come a long way – master shoemaker, husband to Mark, father of two girls, and one half bespoke shoemaker Carréducker in Shoreditch.

In 1997 James returned to England to train as an apprentice shoemaker with world-famous bespoke bootmakers John Lobb of St. James. It was whilst learning his craft that James met his now business partner and fellow shoemaking apprentice Deborah Carré. “It was very much a man’s world in those days, very few women and even fewer gay men” says Ducker. “So when we founded Carréducker in 2004, we were pioneers”.

“The craft of making shoes by hand is the core of our business,” says James – measuring customer’s feet, making a pair of lasts specific to their feet (the blocks of wood the shoes are made on) and then hand sewing their dream shoes in the workshop. From a classic black oxford to a rugged walking boot, each pair of shoes is unique, designed to fit the customer’s feet and to suit their personal aesthetic. This somewhat magpie approach to shoe design has seen Carréducker carve out its own niche amongst the world’s traditional shoemakers, building a reputation for comfort, style, and sustainability.

Asked about their clientele, Ducker says “we have made shoes for such a variety of customers, the guy who saves up for his one pair of dream shoes, celebrities, royals, we can make anything really” 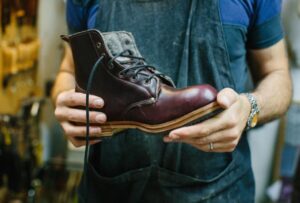 Keen to share their beloved craft with a wider audience, James and Deborah taught their first shoemaking class in 2006. Over the years the number of students grew until James and Deborah found that training was on a par with bespoke. By 2014 they were running a full program of evening, day, and intensive classes throughout the year, including a course in New York, and had outgrown their space at Cockpit Arts in Holborn.

“That’s why we had to find a bigger space” says James. Chocolate Studios popped up just in time, a lower ground workshop in a converted, Victorian sugar factory that the pair have transformed into a multi-purpose teaching space and a bespoke showroom / events space which, although small, has hosted a shoe exhibition, private supper, and a drinks reception. “The Shoreditch location is ideal for us” says James – central enough for their London students and a short cycle to Gieves & Hawkes on Savile Row, where Carréducker have delivered a bespoke shoe service for over 10 years. 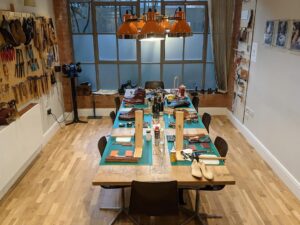 As well as the traditional shoemaking courses, Carréducker has introduced a range of other classes including a leather card case, key fob, pattern making, shoeshine, and a sneaker class. “We want to appeal to everyone,” says James “and we have created a supportive place where people can explore their creativity”.

As a small business owner, it’s inevitable that James has learned new skills over the years. He might have the guns of a shoemaker, but he’s also needed the brains of an accountant, office manager and supply chain manager all rolled into one. 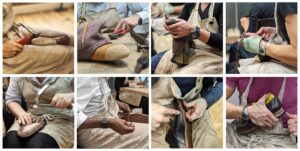 During the pandemic, James and Deborah pivoted their teaching program and created a series of online learning films with Zoom support. Most recently they were tasked with delivering the first-ever independent shoemakers’ conference online. They would both argue that technology is not their forte, but somehow (with help from a few tech-savvy friends) they filmed and edited content for a weekend conference, which they hosted online, presenting a series of screenings, live Zoom interviews with international speakers, and open forums for the 250 delegates who joined them…shoemaking’s very own Phil & Kirsty! 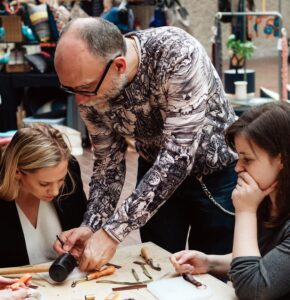 Information on bespoke shoes and courses can be found at www.carreducker.com