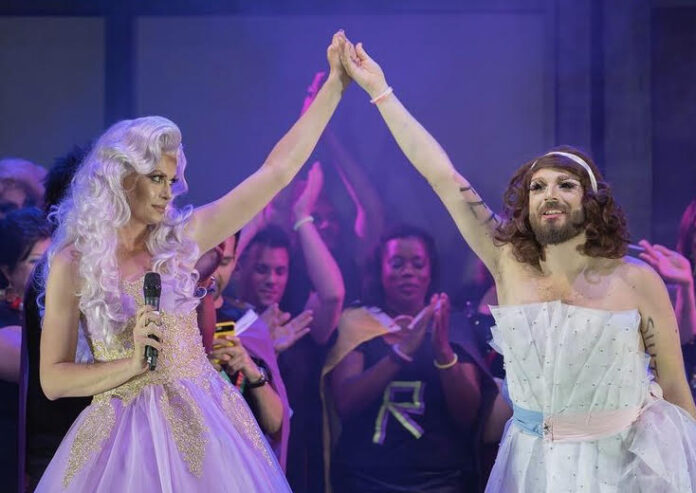 Every month cabaret supremo Jason Reid trawls through the upcoming events so you don’t have to, and picks his cream of the crop for Gay London Life. November is chock-a-block with variety and stellar line-ups…

The diva from down under is taking over Ku Bar every Sunday evening until Christmas, accompanied by John Dunn on piano. Expect sharp witted repartee and big cabaret numbers as well as a gorge selection of cocktails and mocktails. It’s heartening to see more venues properly investing in LGBTQ+ cabaret — please support them if you can.

Without doubt one of the best live satire shows out there, it has been for a long time. The devil is in the meticulous writing and being bang up to date with what’s happening in the world. If, like me, you’re completely obsessed with current affairs, and poking fun at the establishment and celebrity culture, then Newsrevue is definitely for you. Starring Gabrielle de Saumarez, Phoebe Batteson-Brown, Chris Fearns and Eoin McKenna.

ABBA Attack at Halfway to Heaven

Take a chance on Halfway this bonfire night! A night of dancing (and singing) queens who will be celebrating the release of ABBA’s hugely anticipated new album, Voyage. Shows from resident cabaret artists Miss Penny and Miss Moppe, plus DJ Jonny Pablo will be playing tracks from the new album and the best of ABBA’s back catalogue.

A brand new night to the London cabaret scene, fronted by drag and burlesque artists L’amour Le Monde and Kenzie Blackheart. This event takes place at one of the smallest LGBTQ+ venues, but one with a HUGE amount of heart. There’ll be turns from Carrot, Flick, Mistamiss Sirene and Umami Monaé.

Veda Lady and Mark T. Cox at The Glory

Two Irish cabaret legends are reunited after two years apart. This is bound to be an absolute riot so it is! Billed as a night of camp songs and high fashion, all under the roof of East London’s queer palace of performance and art.

Take to the Stage with Pride at Gillian Lynne Theatre

The cabaret superstars of the past eight sensational years of Pride’s Got Talent — a competition which supports, nurtures and shines a spotlight on emerging LGBT+ artists — take to the West End for one night only. Hosted by the incomparable Michael Twaits. I don’t want to blow their horn, so to speak, but anything they’ve got a hand in is a must-see in my humble opinion. Reigning Pride’s Got Talent champions Henry Newbury and Frankly Desire will be performing, as well as Smashlyn Monroe, LaMont, Charlie George, Adam All and more.

Nothing but drag king excellence across the board at Kings of Clubs, which is one of RVT’s flagship cabaret nights. The smooth as silk Frankie Sinatra hosts, plus there’ll be performances from West End star Don One, Daddy Drag, Phoenix Saint, Orlando, Doraian T. Fisk, Oedipussi and Richard Melanin the Third.

Carrot has really been on a roll recently, and long may it continue! I’m delighted for them. I backed them enthusiastically behind the scenes a few years ago during Drag Idol judging. One of the greatest pleasures is seeing artists develop and find their place in cabaret — and there’s space for everyone. Carrot is back in Clapham at the end of the month with a lineup of 5 cabaret legends.

Amazingly there’s 15 acts lined up to perform at this fundraiser. And It’s all for an amazing cause: HIV charity, Positive East. I’ve used their services in the past. So I know they carry out vital work. The whole shebang is hosted by Victoria Sponge, with guest spots from Krystal Ball, Linda Bacardi, Misty Lee, Electric Blue and more! The venue is just a brisk mince from Walthamstow station.

Make sure to catch up with Jason’s best cabaret events this holiday season.. coming soon!