Happy Halloween! I’m D. J. Swales, poet, writer, and audio fiction podcaster of Fitzmarbury Witches, an Amazon bestselling occult horror and dark historical fiction series. My most treasured Halloween memory is a romantic midnight walk in Seoul, my former home, when one of the world’s great Gothic nightscapes snatched my breath. From Mount Namsan’s slopes, my eyes followed the oil-black Han River as it coursed between dark hills, all burning with the neon-red crucifixes of a thousand invisible churches.

In this darkest of months, television and cinema tempt us with their scary offerings. “Thrill us, terrify us!” we all scream, as if the trauma of the past two years wasn’t enough. Perhaps I’m biased, but nothing beats a thrilling book, a flickering bedside lamp, and thoughts of a ghoul under the bed. Halloween terrors regularly trickle down my spine. Grim paths and ghost-riddled spaces have often found me, influencing my writings, poems, and art in years spent chasing the spirit of my Irish sea dog grandfather. No-one knows how many times he circled the globe before he was fatally knocked down into the hold of a ship in the Port of Hamburg. This past decade has been my most rootless, the days distilled in Love in an ISIS Town, my Amazon No.1 bestselling debut poetry collection. Formerly, painting was my sole art practice, but my home and entire art portfolio burned in Seoul. The loss was totemic, but I survived. Letitia has been my only constant travel companion, an extraordinarily roomy and attitudinal suitcase, as poems and dark tales simmered in tatty trains, sleazy bus stations, and anarchic airports. At first, I wrote on beer mats, napkins, and blank pages in the countless books that I was lugging around the world, any scrap would do. Letitia became my roving library. 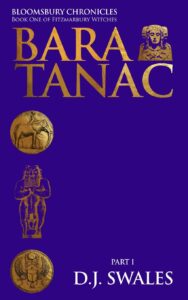 With lockdowns ended, I was delighted to receive a featured author invitation from Gay London Life magazine. Prior to ever living in London, a teenage visit saw me terrifyingly outed to my family by BBC Crimewatch. In truer horror than any Halloween monster, a serial killer was stalking the city, preying on gay men. From the street outside Comptons of Soho, a producer pulled me, a passing stranger, into the bar’s smoky interior to film a reenactment. The show soon aired, zooming in on me and an equally clueless pensioner as the narrator discussed rent boys. Thankfully the killer was caught and, thankfully, I have a marvellous family. I will spend All Hallow’s Eve trick-or-treating with one of our foster children, close to C.S. Lewis and Tolkien’s favourite Malvern pub.

I’ve called twelve countries home, so my life’s list of unholy hostels, bewitched bookshops, and creepy cafés is long. In Germany, my history obsession was ignited while living beside Teutoburg Forest, where three Roman legions were slaughtered in blood-soaked glades. Besides Halloween, I have immersed myself in various religious and folkloric beliefs about the dead, and how they may sometimes walk among the living. Manila, a true-world battlefield of angels and demons, greatly impacted my creativity. The city is a great inkwell of humanity’s stories. On the Day of the Dead, its heavy cloak of Catholicism reminded me of Belfast, where my grandmother’s house was a Gothic feast of rosary beads, Virgin Mary figurines, and enough Lourdes holy water to fill David Hockney’s swimming pools. My teenage mother and I lived with Nanny. Her relics felt like a magical wall against the terrors of “The Troubles”, the ethnic violence that convulsed Ulster. Several were said to have touched the bones of Martin de Porres, Peru’s black saint. Nanny would have ululated had she foreseen that I’d visit Peru and kneel before his mummified body. A Halloween memory endures of sitting on her soft oversized sofa, coughing and blinking through stinging coal smoke. My eyes and ears joined those of Saint Martin de Porres, as Nanny whispered Celtic myths and dark fairy tales in the halo of the crackling fire. Readers of my Fitzmarbury Witches series will recognise the banshee that I imagined lurked beyond the firelight. Nanny’s earlier migrant years (as a waitress for the Bank of England’s directors) birthed a character called Sheila in People of Bloomsbury, an offbeat humorous book inspired by Japanese popular fiction and Armistead Maupin’s Tales of the City. Sheila launches her business empire outside Green Park station, flogging Irish stew from a gleaming samovar hauled on her back.

The first pages of Golem of Nagasaki, my next dark fiction novel, blossomed on Halloween itself, close to Kumamoto City’s only surviving bamboo-and-cedarwood Samurai house. Its final resident was Lafcadio Hearn, the well-loved author of Kwaidan, Japan’s most popular book of ghosts and dark folklore (which I reread regularly). Born close to the cliffs where Sappho leapt to her death, Hearn was a personal friend of Marie Laveau, the New Orleans “Queen of Voodoo”, and would even compose her official obituary.

West Berlin, behind the Iron Curtain, was where I enjoyed my first American-style Halloween. In Nicosia, wedged between bitter adversaries, my mind was opened to a new world of evil eye talismans and hamsa. Their histories stretch back to ancient Carthage, a pivotal lost world in Fitzmarbury Witches, a dark fiction series which was born at 02:00 AM in a stark writing room. Next door was the magical space where Bob Marley’s creative dreams survived his greatest doubts, itself just a stone’s throw from the former Bloomsbury haunts of Mary Shelley, Charles Dickens, and Olaudah Equiano. I describe Fitzmarbury Witches as a ménage à trois between Penny Dreadful, The Last Kingdom, and Game of Thrones. Dark comedy also speaks from the pages, inspired by the Golden Age of Madeleine Kahn, George Segal, and Goldie Hawn. Through Clive Barker-inspired horror, Caligula-style debauchery, and Squid Game-level violence, dark deeds and incidents are connected across distance and time:

In the fifth century B.C., a child is born of prized blood in the moonlit pools of the last great Egyptian oasis before Libya. In 1666, the year of the beast, the vast seething metropolis of London burns to the ground, shocking Europe. Among the ashes, some claim to have sighted a foul creature, aflame, dancing across the doomed rooftops. In 2016, unexplained disappearances continue to confound Scotland Yard, in what some people are calling “London’s Bermuda Triangle”. In 2017, the Royal Barbados Police find a computer in a wrecked rental property. Its hard drive contains a number of poems, mysterious draft books, and a letter of warning . . . 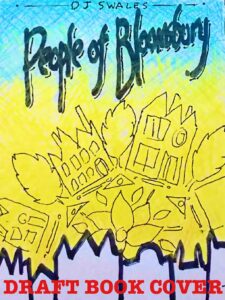 Thank you for reading my article, I wish you a wonderful Halloween. Please read Fitzmarbury Witches and preorder People of Bloomsbury. You can follow my writing adventures at my brand-new blog: tumbleweedroyale.substack.com

You can read the complete first trilogy of Fitzmarbury Witches HERE

or listen to DJ Swales Gothic & Other Tales HERE

Love in an ISIS Town https://geni.us/AU1detY

Golem of Nagasaki (a supernatural thriller)

I Am Worthy (a psychological thriller)